Last Christmas  (2014) there was an article on Bowery Boogie about SantaCon, including a bit about its connections with The FIGMENT Project. The article, and its over 200 comments, was one of the top posts of the blog in 2014. It brought up issues of gentrification, public space, privilege and community, all of which are core issues within FIGMENT, an organization I’ve been in the leadership of since 2010.

This is a repost of a response I wrote to “Atomic’s” incorrect conflation of Santa con and FIGMENT.

I don’t want anyone pooping on my building. Or throwing things at taxi’s because they won’t pick them up. But those acts aren’t limited to SantaCon. I don’t go out in the LES or the EV much these days, particularly on holidays, because some version of this is what I see just about every time.

That said – this article has been reduced to its headline for some and totally was effective in provoking a who-is-Santa / oh FIGMENT is Santa reaction.

I had a strange interaction at work today overhearing a table (I work in a restaurant) discussing the FIGMENT / SantaCon connection. They did *not* read the article, but had clearly read the headline. They didn’t realize that the article was trying to reveal ‘Santa’ via a follow-the-money tactic. I gave them the rundown of the article and pointed out to them that SantaCon had been collecting donations for years, canned goods & toys in the past, cash donations more recently. I explained that SantaCon made a considerable donation to FIGMENT last year and we’re planning on doing it again. One guest said they didn’t know that SantaCon tried to do good. I explained the back history (you can read a good article on it here: http://blogs.villagevoice.com/… ).

I’ve never participated in SantaCon (shocker), I’m not a pub crawl kinda girl. I don’t know what the future holds for SantaCon, but I do know that FIGMENT is bringing something to *all* New Yorkers. I got involved 7 years ago when I saw Puerto Rican kids playing with Hassidic adults in a kiddy pool filled with rose petals. The world is difficult, isolating & frustrating – so anything that can break that reality, even for a few minutes is something I want to get behind. The problem here is that someone is trying to associate the two in a way that will completely discolor an uneducated public’s understanding and opinion of an organization (FIGMENT) that serves the general public, whose mission is to do so and closely follows its guiding principals (check them here: http://www.figmentproject.org/…. I’ve changed my life in an effort to support and grow FIGMENT and seen it change other lives for the positive (ranging from hedge-fund running parents to shy college students looking to meet new people and find themselves).

I respect and understand why you would like to see more accountability towards who is initiating the masses that eventually poop on your street. I also respect and understand the organizers are trying to clean up SantaCon. I don’t respect or understand why someone would try to blow up and accuse any other producer of participatory art events, let alone FIGMENT or Dance Parade, of some grand conspiracy of funding a hedonistic lifestyle. Have you been to FIGMENT? Have you looked at the operating budget? Its a really weak case your are making….and again I’m really sorry people pooped on your building. That sucks. Someone did that to my building in Crown Heights during the west indian day parade a few years back.

I’m reposting it because to me it encapsulates an important idea: when fun is involved, it can get referred to as hedonistic. At the least the activity can be devalued to ‘extraneous’ or simply not as important as ‘the serious issues’ like the environment, civil liberties or social services. Combine that with art and you are often left in the dust, unable to convince everyone the value of play & creativity.

To me the root of all conflict, which is deeply related to why there is injustice in the world, is the fact that people aren’t connecting. When people are divided by class, race, gender and religious belief they often don’t see what we do share in common….you know like friends and family we love, loneliness, fear,  disgust, anger, passion. I’ve never had a problem connecting to people. Mostly because I find similarities. Like the beach, or a book, or a song or dancing or painting or whatever. I’ve sat on a chairlift with a staunch republican, a stoner, my jewish mother and a reformed mid-westerner who grew up on a farm and witnessed the conversation go from snow conditions to what kind of music we prefer hearing in the lift lines. We disagreed, but low and behold – because we were all skiing in the same place, a place we love, having a great day, all of our differences didn’t matter. In fact we enjoyed the conversation….because PEOPLE WANT TO CONNECT!

This is not to undervalue conflict and ‘the fight’. Fighting is good. Look what Larry Kramer did for civil liberties and access to health care (through AIDS activism). In order to fight, you have to care. In order to care you have to engage. Larry Kramer fought for the rights of homosexual men, then people of color, then everyone else who wasn’t the straight white majority who were in power, who were not connected to the people devastated by AIDS – a plague the government ignored for far too long.

We all fight for life – the right for the life we want to lead & the right to have the means to pursue it. The only thing I know for sure is most people, nearly all people, want to have joy, love and fun in their lives. One way I know how to give it is through free, collaborative, community oriented art events – where everyone is free to create. And it is through that act of play & creation I witness connection. The connection we need to go out there and make our lives, the lives of others, the sustainability of civilization, happen.

“Life isn’t easy. Responsibilities aren’t easy. Building a life together isn’t easy. The rewards, I think, are great if you are willing to go beyond – beyond the organism.” – Larry Kramer 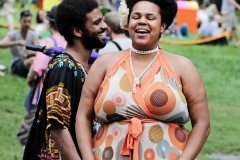 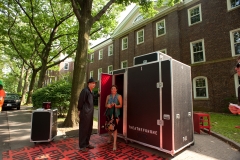 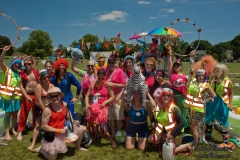 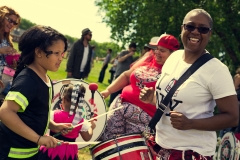 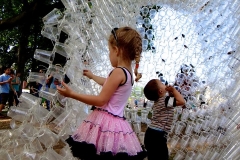 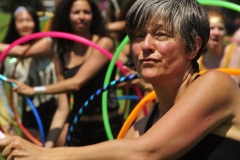 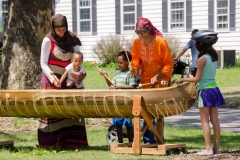 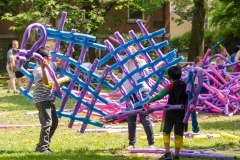 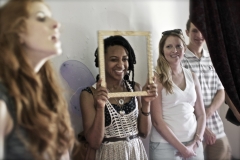 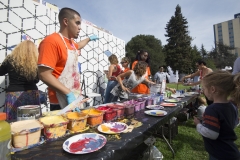