Arthur Miller’s “The Crucible” is a perfect fall show, particularly when executed in a community garden in the Lower East Side. One of my proudest production design efforts (costume & sets), I was able to build out one wall with salvaged oak flooring which functioned as both the inside and outside of structures. The costumes were also constructed with found materials – yet every part of the design seemed intentional and not under-budgeted. Unfortunately, the entire show took a turn when Hurricane (superstorm?) Sandy hit between our 1st and 2nd performance weeks. After attempting to do one show in the garden the board of La Plaza Cultural voted us out citing concern over the safety of cast, crew & audience. Forced to move elsewhere we landed in a live / work loft space, most fondly remembered in my community for multi-day after-hours parties and meditation classes. We were able to recreate the sets with a series of staggering black flats & set dressing from the La Plaza set, creating intimate acting spaces that better featured the actor’s storytelling. It was a win-win. The garden incarnation the show reflected a fuller composition where the set design and overall setting of the show played as strong of a role as the actors did. In the loft venue, the actors and story were the centerpieces. As a designer who prefers working on projects where every aspect of the visual and performative elements are equal in their contributions, I appreciated that we had this opportunity to present our work in two ways for both the audience and the cast to experience. 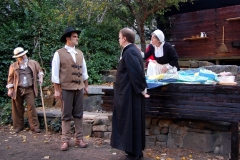 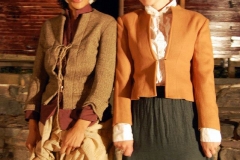 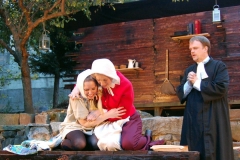 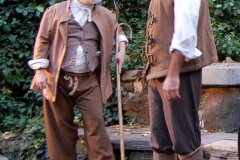 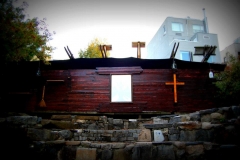