In 2010 a friend approached me with the bold statement, “you’re into Olivia Newton-John, right?”

He went on to tell me about this idea he came up with when driving and Lets Get Physical came on the radio.

The whole car burst into song, which was unexpected. Something as campy as ONJ seemed out of the interest zone of most of our friends. The east coast burner scene presents itself as pretty low on old school, Mommy Dearest quoting, Liza Minelli Loving, oh-how-I-miss-the-brown-parties queer culture. It has always been very sex-positive & open minded, however on a superficial level it always felt a bit straight / swinger / bi oriented, with the culture that is stereotypically packaged with it.

This *is* a broad sweeping statement, but lets just say that it wasn’t unusual to find yourself sitting next to campfire quoting The Big Lebowski for hours. However if someone got to the Jesus line and I suddenly busted out with Jesus Christ Superstar, no one ever sang a long. Once someone thought I made the song up on the spot.

So said friend found it unusual when the entire car burst into song, drag moves and all.

Its was also the time of the flash mob. A prison in China had done Thriller and T-Mobile had just done their event in Liverpool Station. So of course the next logical thing was for us, to do a flashmob, to Olivia Newton-John.

We enlisted 2 choreographers, another costumer and about 40 burners who showed interest in 80s pop music and activewear. To be honest, I think all the gays we knew showed up, a bunch of gay-adjacent ladies and a small assortment of others who were either dancers, performers or otherwise inclined to the camp and the campy.

We picked out our destination: PEX Summer Festival at Camp Ramblewood in Darlington, ME. We knew it would happen at the pool. We ordered t-shirts in hot pink that said “Feel the Burn” in blacklight reactive neon orange ink. We also designed our own logo “NYC Department of Spontaneous Combustion” in the style of the NYRHC.

What happened next was inspirational. Sure we thought it was brilliant, we knew it would be fun, but we didn’t know or expect the response we got.

As we ran down the hill towards the pool you could already see the people in the pool get excited – it wasn’t for us – it was the fact that the music had turned towards ONJ & away from the awesome, but the expected burner-house (that was likely deeply laced with dub-step, it was 2010). However when we arrived….this is basically what happened;

It changed my mind a bit. I realized that I shouldn’t assume if someone likes The Big Lebowski they don’t also like 70s Andrew Lloyd Webber musicals.  Additionally I realized that if you bring something fun and slightly inspirational to people, they generally will join in or at least show respect, even if it is something they aren’t normally inclined to show interest in.

The NYDSC quickly disbanded, though there was talk of a Mr. Roboto edition years later, it never came into fruition. Now we are all spread across 4 different cities…its time came and went – but such fun. So. Much. Fun. 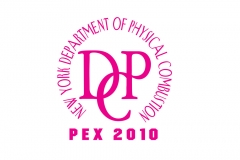 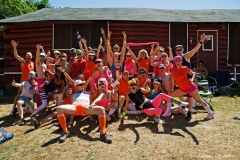 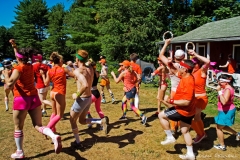 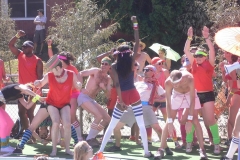 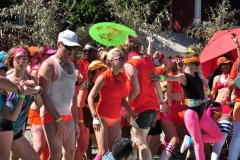 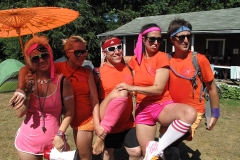 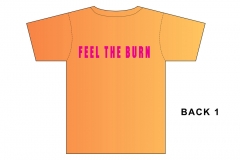 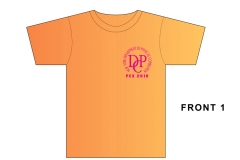