In 2005 I met theater director and producers Mahayana Landowne working on Rounding Third at Millbrook Playhouse. Before she came on to direct the show, members of the Millbrook company had said that we would get a long. We did.

Over the years following we lost touch.

Fast forward five years and I find myself back in NYC working as a theater and dance designer. I applied for a job I found on one of the theater websites – made it through the companies artistic teams interviews and had the final interview with the director.

On my way to meet with her, giant portfolio in hand, the subway stopped before my stop . Apparently the rain had gotten so severe it flooded the tunnel. I popped out and gave the director a call.

After deciding we couldn’t meet that night – she offered that I come to her house for dinner. I immediately thought “that was a little forward” – not knowing I was talking to Yana. Wanting the job I took her up on her offer and came over a few days later.

Yana opened the door. I was shocked. Big hugs ensued. I was also pleasantly surprised by a pewter necklace featuring ‘the man’ – the emblem of Burning Man. We had discussed Burning Man often working on Rounding Third – she had not been yet & I thought she would really enjoy & get something out of it.

During the interview I was not treated differently in the least – she put me through the ringer. I was unsure if I got the job until the last minute, but I did.

“Impossible Country explores what it means to leave behind everything you know and start anew.” – Mud/Bone website.

I worked in collaboration with the company to discover a costume design that would reflect the individual personalities and diversity of their clothing heritage, which at the same time used color to unify their new experience.

At the time I felt that these design choices were appropriate. I’ve since changed my mind. I feel that there should be elements that unite them as refugees & New Yorkers as well as elements that set them apart as individuals with different backgrounds.

Each performer had one costume for the duration of the show. I would change that now.  If we started with these muted costumes and then slowly brought them into something contemporary and pedestrian, the design could of worked better as a metaphor for their journey from refugees living in the fringes, not interacting with the rest of NYC, into full participants of New York’s vibrant community. 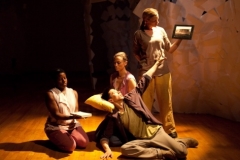